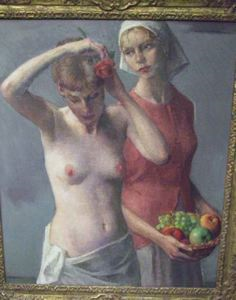 
Object Type: Painting
Creation Place: North America, American
Medium and Support: Oil on Canvas
Credit Line: Gift of Dr. John J. McDonough
Accession Number: 1978.108
Robert Brackman was born in Odessa, Russia, now modern day Ukraine, and immigrated to the United States with his family around the age of ten. He is best known for his portraiture and still lifeâs. As an educator at the American Art School in New York City, he rejected contemporaneous abstract trends stating that abstract art is "for the dilettante and good conversationalist, and not for a student who wishes to become a professional artist.". In his early 20s, Brackman studied with Robert Henri and George Bellows at the National Academy of Design.

Keywords Click a term to view the records with the same keyword
This object has the following keywords:
Fruit, Nude, Portrait, Women
Portfolio List Click a portfolio name to view all the objects in that portfolio
This object is a member of the following portfolios:

Your current search criteria is: Portfolio is "Paintings 2022" and [Object]Display Artist is "Robert Brackman".